I am ze locksmith of love, no?

My feeders have a friend who lives in Paris. Not Paris, California, which is kind of a dump, but Paris, France, which is a country outside of America. Paris, France is known as a pretty snazzy place. The guy who feeds me has been to Paris and stayed at the Hotel California. There's something kind of funny about that. The owner of a pub close to there arranged for a satellite feed so he could watch the Nebraska-Texas Division Championship game. Now that's service!!


Whenever I hear about Paris, one of the most famous Parisian's comes to mind - Pepe le Pew. Actually I don't know of any other Parisians. I'm sure there's lots of them.

Terry, who is the friend of my feeders, has a cat of her own.  She is called Harriet, which seems like a mistake for a cat, to be honest.  Terry sent a couple photos of Harriet which I am duly sharing with my readers.

Harriet is a Torty which is a cat breed well known in Paris. I wonder if Harriet has had any run-ins with Pepe le Pew?  He gets around and really has a feline sexual orientation. One should be accepting of different sexual orientations. I'm afraid an awkward question emerges, however. Mr le Pew is a skunk which is a different species than a cat. That's just the science of it. But is that kind of love something that should be encouraged?  I don't think humans would find it acceptable if a guy nailed a goat! Unless the guy was a lonely goat herder. There are always exceptions.
Well ... if Harriet has had any romantic encounters with Pepe, I hope it was a good experience. We have a skunk that comes into the backyard every now and then. Just to be clear, I've never thought of having sex with it!!

Welcome to Harriet!  If Harriet has a web page I hope she lets me know so we can link up and boost our google ratings!
Posted by Liam the Huskercat at 8:25 PM No comments:

Brianna drove all the way from Irvine to see me and she's my latest Sexy New Friend (SNF). She's a cat kind of person- she has a cat she calls Sapphire. That sounds like a girl name but Sapphire is actually a guy Siamese cat. Siamese cats are originally from Siam which is a really old country. In fact, it's so old it doesn't exist any more. I'm not sure how a country disappears but it's a good thing some Siamese cats escaped before that happened!! Although Sapphire is Siamese, he's all-American. Brianna isn't the kind of girl that's going to have some kind of import cat, taking housecat jobs from American cats.


Brianna came to get her picture taken in my world-class, gigantic water dish. I don't really need an 18,000 gallon water bowl but that's just how it is when you're in a luxury location like I am. My guy owner (who thinks he's a photographer) invited our buddy, Dave (a real photographer) over and they went crazy taking all kinds of pictures of my visitors. Here's some pictures of Brianna ...


I'm not a photographer but I have one. Who do you think takes all my blog photos!  I got better things to do. I mean when you sleep 18 hours a day, that doesn't leave much time to get things done!! ha!!  Here's the weird thing about these pictures.  Notice that when Brianna has her swimsuit on, she's not in the pool. BUT when she is wearing a dress, she's swimming around!!  There's all kinds of odd stuff that goes on around this place, but this is confusing. 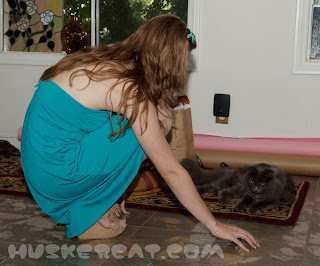 After Brianna was done, she took another moment to play with me. She was wiggling her finger in front of me in such a way as to bring out my primitive predatory instincts which have proved fatal many times to birds and lizards. My backyard is basically a bird killing field. 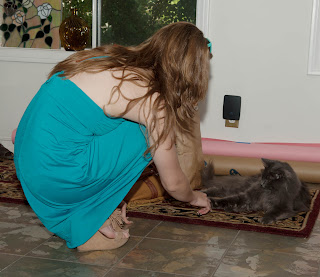 My predatory instinct is automatically going to try and nail a quick moving object. Whether it deserves death or not. Brianna didn't know how dangerous I can be.  I'm a predatory killing machine who is fully armed with two sets of front claws - these are my license to kill (so to speak).

Her cat doesn't even have front claws. So she made the mistake of making her finger look like a tasty morsel in a predatory training exercise.

This particular surveillance photo shows the exciting moment where my claw meets her pretty finger. 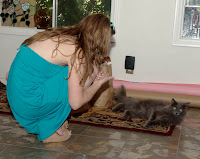 Here I can be seen relaxing having discharged my evolutionary destiny of nailing her finger. I nailed it pretty good too drawing blood.

Everyone seemed a little upset about this. Everyone needs a reminder that had that been a bird that I  had murdered, I would have recieved multitudinous accolades, compliments and probably a commendation or two. But because it was Brianna's finger, everyone was unhappy. 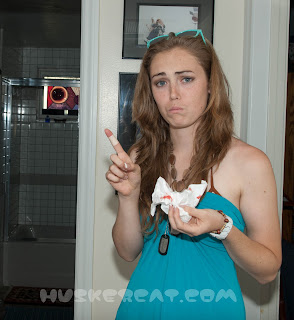 My owner made like he was some kind of super-emergency room surgeon and put a bandaid on her wounded digit. He needs to get a life!! Then he insisted on a photo of the medical procedure (seen to the left). He also insisted that Brianna hold up the bloodied tissues!!  Wow - talk about Mr Drama!

So now I got all this bad PR!!

For the record, she said it was "no big deal." She even showed off a scar on another finger from getting scratched by some cat last week! She shows no fear with those of us (i.e., cats) who are known as the "world's most efficient killing machine." (Seriously, we cats are called that! evidence here) No big deal she says, scars to prove it - hell, she's got more balls than the men around here.

Brianna isn't from Nebraska so she hadn't heard of the Huskercat before today. She did share that she learned how to husk corn on July 4th. That officially makes her a cornhusker! (note the lower-case "c") Brianna is my latest SNF and she loves me despite all the whining of the older adults who were aghast at her bloody accident. The other older adults around here need to get a little more realistic with their attitudes about cat behavior in order to stop this pussification of things around here. Brianna and me are chill - they need to chill out too!
Posted by Liam the Huskercat at 11:19 PM 1 comment: 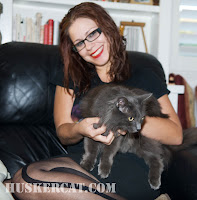 This is Jessica and she came all the way from Redlands to see me! I think it's clear from this photo that she easily qualifies as one of my Sexy New Friends.  Naturally I'm happy to have another friend, especially one with SNF status, but she came when I had tons of things to do. I run a pretty tight schedule with all my Huskercat things I am responsible for. I hope she'll come back to visit so I can absorb all the attention she wants to throw my way!

She's from Redlands which is supposed to be a cozy, pretty little town. My web guy took a look at the city web site and found some good news and some bad news. The good news is that the city has dog obedience classes for the damn stupid dogs that have infested the city. I'm happy that where I'm at where I don't have to worry about unruly, undisciplined mongrel dogs. In Riverside, unruly dogs are shot on sight. That's why it's known as a "dog-gone good city!" HA!

She seems to be a pretty happening girl. We could use more visits from her to pick things up around this place. 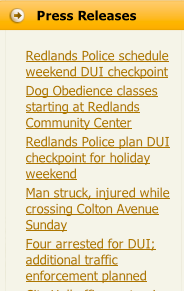 The bad news about Redlands is a little surprising - there appear to be a lot of drunks there! Probably driven to drink by all the unmotivated, slobbering dogs. We need to be reminded that alcoholism is a disease and usually caused by having a dog. It's also not a coincidence that a practice of alcoholics to reduce hangovers is called "hair of the dog." It's disgusting.
Posted by Liam the Huskercat at 11:00 PM No comments:

Who the hell is Bruce Chillis?, you might be wondering. Yeah, exactly. Who the hell IS Bruce Chillis?  I certainly had never heard of him. Or it. Bruce turns out to be a traveling banana! He even has his own web site like me except that hardly puts him at the same level as me. 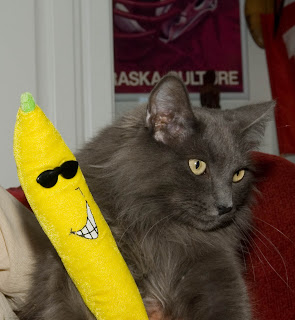 Here's some surveillance photos showing how Bruce, the Banana, intruded into my personal space on Sunday.  I tried to be patient, but this banana is all about himself - me, me, me! He also smells funny. Kind of like a dog fart. :D

Ol' Bruce should be happy that I don't like bananas. Otherwise I would have peeled him naked and ate him! Bananas are funny. No fruit has more stupid jokes than the banana.

Q: What is yellow on the inside and green on the outside?
A: A banana dressed up as a cucumber!

I told you!
Posted by Liam the Huskercat at 8:40 PM No comments: