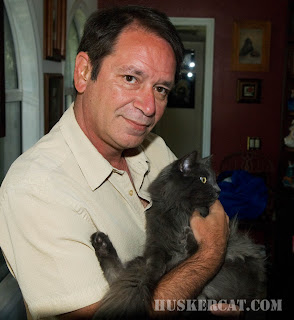 Dave's my buddy from Vegas and comes to see me a couple times a year. That's a 3 1/2 hour drive that he often does in a little under 3 hours. So somethings fishy with that.


He's a photographer in Vegas and always shoots me when he comes. It makes sense he would want to take pictures of me since he shoots people like Paris Hilton (she owns a hotel or something and is from France), Taylor Swift (a singer my owner likes) and Kimberly Kardashian (I have no idea who that is). He's done portraits of Jennifer Lopez (a hot singer), President Bush, and Karl Rove (I think I've heard that this Rove guy is some kind of evil criminal of some kind or a distant cousin to Satan, The Lord of Darkness). I don't really know who these people are, but I mention it because since he takes pictures of celebrities and big shots, that explains (by the process of analogy) why he would drive all the way here to take pictures of me. I'm using simple deductive logic here which I might add is highly recommended by Aristotle who lives in Greece and was used by Sherlock Holmes who was the most famous detective ever. Roger Bacon in the 13th century tried to push something call inductive logic which is vastly inferior to deductive logic. Although Roger was something of a failure as a philosopher/logician, he is best known for discovering a tasty meat treat that goes well with breakfast. 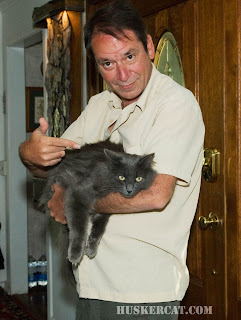 Somehow Dave is able to put me in a trance. He does this every time he visits! He appears to be showing off in this photo. I think he gets lessons from one of those Vegas magicians. My owner tells stories of growing up on the farm where he could put chickens in a trance by putting their heads under their wing. Chickens just go right to sleep when you do that. The fun part comes when you then toss them in the air. That scares the shit out of a chicken!!! That's too damn funny!  Birds are stupid. Although my owner grew up on a farm, he was not "born in a barn" as I've heard many people ask him.

I'll post some super photos Dave took of me soon. I wish he'd give my owner a lesson or two. One thing my owner has proven is that having lots of cameras doens't make you a good photographer!

I hope Dave comes back soon. My quality of life goes up when he's around!
Posted by Liam the Huskercat at 5:54 AM 1 comment: