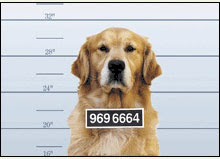 I'm not a scientist or anything. I don't have time to go to college and let's face it .. they wouldn't admit a cat anyway. I spend too much time sleeping and eating. Hmm .. so maybe I would be a good college student ... But all this doesn't mean I don't watch for the latest advances in evolutionary anthropology especially when they prove that cats are betters than dumbass dogs. Cats are better hunters (I think everyone knew this), but apparently we're much more stealthy than dogs, which obviously makes us smarter. Dogs are better at long distance chases, which obviously shows they're stupider. Why put in extra work if you don't need to? Evolution always favors those who can be strategically lazy - it's all common sense really.

Their data shows that cats have "a previously unrecognized mechanical relationship in which crouched postures are associated with changes in footfall pattern, which are in turn related to reduced mechanical energy recovery." I'm not exactly sure what that means, but another scientist said that "cats hold the edge in all-around hunting skill. Overall, they've fine-tuned their system." That validates what I've said for a long time - I'm a finely-tuned system. I'm glad science is finally getting around to studying this. They would have figured this out a long time ago if their scientists were as good as the ones that made Fancy Feast's Tuna Feast with Gravy. Oh well.
Posted by Liam the Huskercat at 8:17 AM No comments:

How to tell if your cat is killing you.

No, No, NO. the website, catswhothrowupgrass.com is only advisory. Some humans have posted on their blogs some grave concerns about how this goes to a page about How to tell if your cat is plotting to kill you. It has signs like how if a cat is kneading on you it's not a sign of affection but that the cat is checking your internal organs for weaknesses.

Humans have reacted to this and I just wanted to point out how these warning signs are only mere suggestions in the cat world. They are far from clear cut indicators of cat behavior. They are not some kind of imperative. The site was clearly put together by some paranoid, conspiracy-minded dog lovers. Humans have no need to worry about cats. Dogs are the stupid and most digusting creatures in the animal kingdom. Humans should worry about dogs!

It doesn't take much time googling to discover that some of the most evil people have loved dogs. Hitler had a dog. I don't think much more needs to be said! Oh, and he named the dog Blondi. It takes some serious sick psychopathology to name your dog Blondi. I hate to succumb to Godwin's Law here but the facts speak for themselves. That ain't no cat sitting next to Hitler with its tongue hanging out drooling like a moron. And besides, pets are supposed to make their humans happy and I don't see a smile on Hitler's face. Hitler wasn't a pleasant person and I wouldn't be surprised if it was his dog's fault. And I'm not blaming that dog for the holocaust. Although I wouldn't be surprised, to be honest here.

We've all heard about Cruella de Ville. She's one of the more infamous dog lovers. She had a fetish for dalmations and made them into lovely coats. Although this is a horrible way to go for an animal it's a little hard to imagine that the dogs hadn't done something to deserve it. But that's just my opinion.

And remember I said they were disgusting? Well if you plug cat lovers into google you find the most fun stories and things to buy for your own cat.

However!!! If you plug dog lovers into google ... well, I really can't find the words for the creepy, disgusting stuff that dogs do to their humans, but I suspect any human with more than a box or rocks for a brain can imagine what you might find at a web site called doglovers.com! I think we know where the phrase man's best friend came from! Listen - I'm not making this shit up! If you're not buying this then maybe you need to just grow up and face reality!!!

People don't need to worry about us cats! That's all I got to say about this matter.