We've been having rat problems on the home front for a couple weeks! Turns out the city tore out a bunch of ground cover in the middle of the street not but one house away and, all the local houses were recipients of the rats who previously were plenty happy there. This has been loads of fun! Nothing like a good rat chase to keep one young! Anything that will help me stay young is good since I'm 18 years, 2 months old. But who's counting! 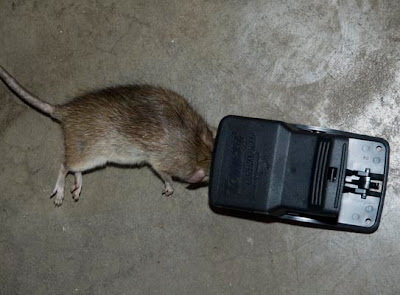 The owner got one of these big traps for the garage. They think they pretty much got the house sealed up but there still a few sneaking in somehow. Or maybe they can't get out. I don't care as long as we get them appropriately murdered. In a fun irony we put cat food in the traps. The rat sniffs his way (or her, I'm an equal opportunity rat slayer) over to the trap and as soon as they put their little sniveling rat nose onto the food - SNAP!!! The big serrated jaws of death hammer their head instantly sending them to Rat Hell where they will burn for eternity or be eaten alive by Satan's cats.

Before the owner got out here to see the recently demised rat cadaver I was able to lay out the crime scene. I've done this a million times as an experienced RSI (Rat Scene Investigator), thus the obvious professionalism you see in the crime scene photos. Just doin' my job. 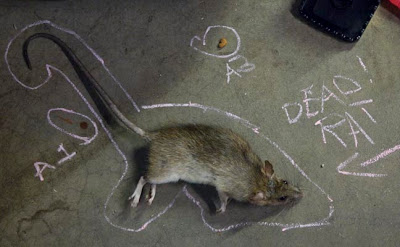 Exhibit A3 (above the expired rat) shows a piece of the cat food. It's Friskies hard food that leads the rat to his demise. Another lovely irony is that the food pieces are heart shaped. I like to think that I kill with love. I'm all about love especially seeing as how I love murdering rats! As can be seen in this photo, I'm a paws-on type of cat. Here I am smelling the sweet smell of rat termination. 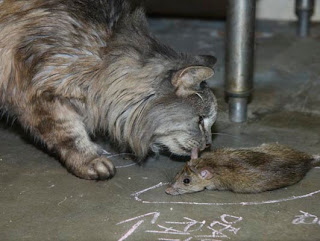 I don't mean to be crass but this is kind of funny. The trap slammed down on the rat sooo hard that the just expired rat blew blood out its ass! That's why I said it was crass. Get it? HA!! I'm glad his little rat family didn't see this! How embarr-ass-ing 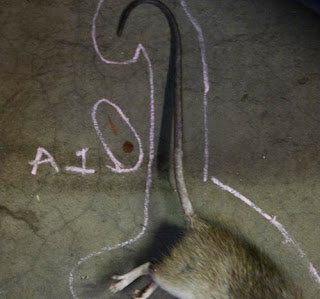 would it be to see a rat family member who had a little explosive bleeding upon his p-ass-ing? That's a rhetorical question really - obviously it would be embarr-ass-ing. Damn, I'm having too much fun with this!! No doubt about it, dead rats are damn funny.

Anyways, suffice it to say that the deceased rodent is no more, he's gone to meet his maker, and that's just how we like them here. What you see here is a traditional kind of rat killing machine, but my one owner is rather perverse about rat murdering. 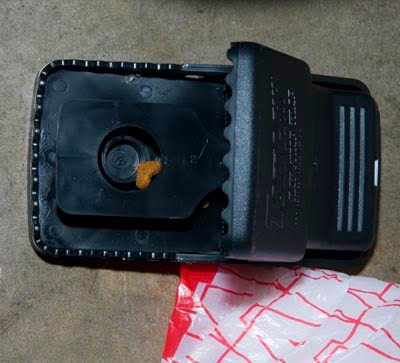 He's willing to spend the big $$ for latest technology in rat extinction science.

He got four RatZappers (trademarked name) for the attic. They are little metal tube things (see photo) that you put food in the end and the rat sneaks into the tube and when he puts a thieving paw by the food he triggers an electrical shock (a zap if you will, specifically a rat zap!) which fries his brain and stops his heart dead basically snuffing the consciousness out of his future. It's pretty fun to watch!

If rats had a brain they would know that I deploy only the latest in innovative, breakthrough rat murdering technology at our facility! The units even have a remote monitoring device so the murderer doesn't have to take time out of his day to check the traps. These things are so efficient they have to be German technology!

The RatZapper company says their annihilation units are 100% humane with "no blood, no gore, no mess." That's too bad - apparently the company doesn't appreciate the deep emotional satisfaction of inflicting pain and torture resulting in blood, gore, and, yes, a mess! Nothing wrong with a little rat mayhem! I'd be happy to consult with them in developing a ratzapper that was only 20% humane. This unit would come highly recommended in the cat community. I have time to do this since, due to the economy, my hours have been cut back on my Huskercat promotional responsibilities and Fancy Feast hasn't come through with a contract yet. I hope I'm not sending letters to the wrong address ....

So, anyways, all I have to say to rats, to paraphrase former President Bush, is BRING 'EM ON!
Posted by Liam the Huskercat at 3:05 PM No comments:

Scoring drugs and the payoff!

This is a story about drugs and money. My owners had been plenty neglectful and hadn't renewed my Rx for prednisolone. I do 5mg/day. It's a steroid and I'm supposed to take it every day. I can be a monster on that juice! My owner went to the Canyon Crest Animal Hospital which is where I'm seen for usual problems. When I need an oncology specialist Vet naturally I go to the California Veterinary Specialists (CVS). But I'm on drugs because I have cancer so EXCUSE ME if I don't want my humans farting around with this!! So anyways, the Animal Hospital, which is close to home, seems to be all decked out for Christmas. Let's bear in mind that it's the day before Thanksgiving so apparently the Animal Hospital is trying to cash in on the crass commercialism of Christmas rather than respecting it as a traditional religious holiday. Not that I give a damn one way or another, actually. 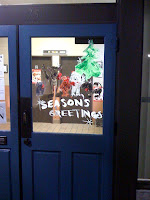 To get back to the story, my owner wanted to score the steroids at the local place but it's the CVS docs that prescribe it. Apparently is some kind of federal crime (!!) to have one place dish out the drugs unless there is some kind of coordination of medical care. This is all getting pretty complicated given what I hear you can score at the middle school a few blocks away. I'm sending my owner out to score the drugs. It's hard to imagine this is a crime. It's not like Rush Limbaugh did time for having his maid do the same thing! We're both celebrities! Just give us the damn drugs!! 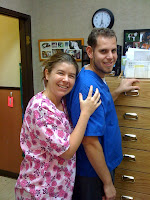 Thanks god for Jennifer (on the left) who is the vet tech who visits me when my owners take off. As a trained specialist, she is able to give me the drugs I need every day as well as serve me dinner (always Fancy Feast Grilled Tuna with Gravy). She works at the animal hospital and she fast talked her way to getting what I needed since they have them right there in the hospital. So my owner scores the dope and hightails it home so I can get back on the juice. This all happened because my owner finally paid her professional fees to looking after me a couple weeks ago. They need to stay on top of this a little better.

The only question I have now is who the hell is that guy in the picture?? His name is Ryan but I've never seen him. He doesn't care for my needs. The only thing I can think of is that he wanted to hop onto Jennifer's claim to fame as a regular on my blog. But I don't know Ryan from Adam. Actually, I don't even know an Adam. I'm not sure why I said that. But if he pulls that stunt again I'll bill him for my promotional services!
Posted by Liam the Huskercat at 6:52 PM No comments: