Realism vs Classicism in Cat Art

I'm not big on so-called "art" unless it's pictures of cats. Especially if they are pictures of me!!  While I want to talk about some pictures of me and contrast artistic Realism as an aesthetic vs the Classical or Romantic aesthetics, I want to convince you that there are many famous pictures of cats. How I will accomplish that task is to simply show you a small sample of the large bunch of famous painters painting cats.  It's kind of odd that all three of the painters that come to mind were French. But many French persons wear t-shirts that say J'aime Les Chats. That's French talk that says "I'm crazy about my cat!" There's also many non-French-person books about art and cats.

The Mona Lisa is one of the most famous pictures of all time according to experts. I'm not particularly fond of it because the lady creeps me out with how her eyes seem to always look at me. It turns out that my being creeped out was not unfounded!

----------------
Renoir was French and painted all kinds of cats. He even painted cats with people who were naked. These are pretty tame compared to what a 14-year old can find on the internet now a days.

---------------------------
Here's another famous painter who painted cats. All mentions of him misspells his first name (should be Edward, right??). I don't want to make a big deal out of it because I want to talk about the juicy part of art theory and then put photos of me into the larger context.

So anyway the first appearances of the term realism was in the Mercure français du XIXe siècle in 1826, in which the word is used to describe a doctrine based not upon imitating past artistic achievements but upon the truthful and accurate depiction of the models that nature and contemporary life offer the artist. I wasn't around in 1826, so I can't vouch for that, but it seems truthy enough. The French proponents of realism were agreed in their rejection of the artificiality of both the Classicism and Romanticism of the academies and on the necessity for contemporaneity in an effective work of art. They attempted to portray the lives, appearances, problems, customs, and mores of the middle and lower classes, of the unexceptional, the ordinary, the humble, and the unadorned.

I present the following two photos of me for discussion. Here I am looking all humble and unexceptional. Way to unexceptional for my taste. Therefore, this image isn't really art - not the classy kind anyway! I look like a bum and if you've read all my blogs, you know I'm not a ordinary cat. Ordinary cats do not have their own web site! Or their own domain name! (like huskercat.com)

-----------------------
Now contrast that to this one (below), which to my mind looks pretty classy. I kept the same pose in this one. That way you can judge them without bias for your conclusion that I'm a very classy cat. Note that the viewers attention is drawn to me. There are no pointless parts of the image. Just me and I'm all framed up which emphasizes my superiority and greatness in the feline domain.

Let's face it, no "humble" cat (never met one of those, btw) would draw a viewers complete attention like I do. This is a great image. It is clear that this frame and the wall and floor, for that matter, are simply a artistic vehicle to make me look good! And that's how art works.
You can take pride in how much you've learned. You're a better person for having undertaken this chore. If you have any questions, I don't want to hear them. For the definitive book on cats in art, go buy this book! It will answer all your questions.
Posted by Liam the Huskercat at 1:00 AM No comments:

The good news is that I have a new friend! The bad news is that she is visiting me every day this week because my owners have abandoned me! It if wasn't for her I'm sure I would have died from starvation and probably dehydration!

My new friends name is Michelle and I warmed up to her right away (see surveillance photos).  She's keeping my water bowl loaded with the ol' H2O, purified by the City of Riverside. She's under orders to keep me inside. When I'm outside I have a 18,000 gallon water bowl available to me. It's an important part of this compound I occupy with the owners. I heard that there is an international Communist conspiracy to sap and impurify all of our precious bodily fluids. I am the first line of defense against this conspiracy - at least my yard which is quite sizable.

I couldn't hang out with Michelle all day so I had to take off and mark my territory outside. 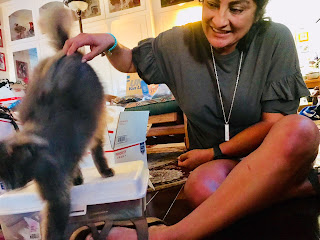 Me and Michelle again


Posted by Liam the Huskercat at 9:29 PM No comments:

Ok, readers, here's the deal. In my earlier post I detailed how Michelle was being conned into enforcing my owners demands to keep me in the house ALL week. Michelle did a fine job of making sure I had food and drink. My owners, who were on vacation in Kittyhawk, North Carolina, demanded that Michelle send a photo of me on Wednesday. As can be seen from the following photo, it's clear that I'm suffering from Cabin Fever, which is a real thing. In fact, what I want (to be let out) is exactly what the cure is for Cabin Fever. It's an insidious disease Scientists have proved that therapy for cabin fever may be as simple as getting out and interacting with nature." This is what I have demanded but, oh no, my owners demanded that I be kept indoors. Scientific research has "demonstrated that even brief interactions with nature can promote improved cognitive functioning and overall well-being." After they let me out, I will try and find a place where my overall well-being is a high priority! Stay tuned!!

Posted by Liam the Huskercat at 9:55 PM No comments: