Well it's almost the end of Halloween. I never like Halloween because I rarely get the attention I deserve. Apparently black cats are the big deal on October 31. I get sick and tired of racial discrimination. I don't have anything against black cats. Hell, I have a black cat friend. It's just that you'd think we'd be past all that by now. It's not a practical problem though since I get to be the center of attention the other 364 days of the year. Not that I'm keeping track. 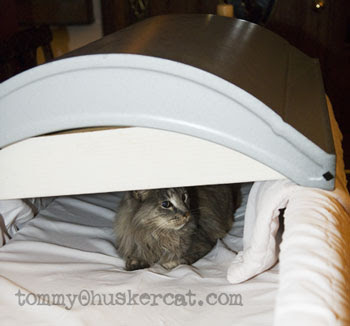 Anyway, that's not important. What happened was that the humans had a Halloween party. The people who came over were really weird. Everyone dressed up strangely. So I sought refuge in this new piece of furniture they moved in for the occassion. It was very cozy although it was way more room than I needed - I mean a human could have laid down in that thing. The guests seems a little creeped out with it which was fine by me. I prefer to be left alone when the house is full of weirdos. I'm glad this day is over.
Posted by Liam the Huskercat at 11:05 PM No comments: