reflections on the birds

I've written before about that damn bird feader right outside the door here. The owners fixed it so it's really high so there's like no way I'll snag one on the feeder. But the bird feed (they eat seeds which if you think about it is really retarded!) drops to the ground. When that happens I can spring to action. Like I was wanting to do here! Except nobody would let me out! There were several birds dumb enough to perch themselves not but 3 feet in front of me but there was this big glass door keeping me from my evolutionary responsibility of murdering a bird or two. And then eating them. YUM! 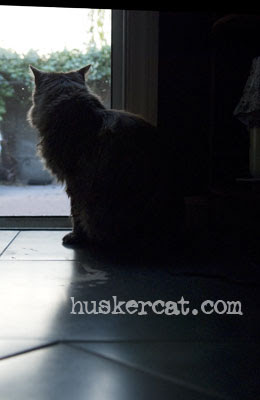 So there I was (see photo) all ready for lunch but the cafe du Écouter ( <--- that's french for bird!) was closed to my kind. Which is discrimination and that ain't right. Plus, it's like they're trying to starve me! Birds are tasty but sometimes the feathers make me barf the bird right back up although it would still be dead. Maybe the owners think I have an eating disorder. That could be since as a celebrity I might be mistook for a celebrity with one of those binge/barf things going on.

I don't know, but all this is just whipping my appetite up! I wish they had a Fancy Feast (Grilled, of course) with bird meat. They have chicken but chickens aren't real birds. I got to go badger one of the owners into dinner!
Posted by Liam the Huskercat at 4:24 PM No comments:

Today was kind of a bore. It was Mother's Day and frankly, I have no idea who my real mom was. Probably some stray cat (not that that's a bad thing - everyone can't be as lucky as me!). My real mom now is the cute owner. I probably should have got her a card or something. Anyways, today was kind of a snoozer until Passion showed up. I don't mean like some kind of barely controlled emotion kind of Passion, I mean this girl called Passion - that's her name! But I hardly noticed her unusual name because she has blue hair! I've never seen a person with blue hair! Even with some of the wacky things that go on around here she's my first blue-haired sexy new friend! 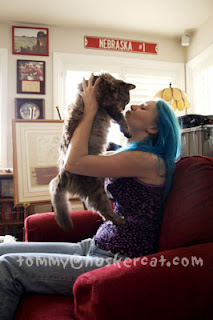 A couple times around here we've had visitors with pink hair, but I got to tell you that even for a puss as worldly as me, I've not come across someone with blue hair. But she seemed like everyone else who comes over here - she's quite taken by me as can be seen in this surveillance photo. She's really pretty bold snatching me up like that and plastering a big kiss on me! I'm not complaining, but that's what she did. She had the good taste to PDA me in the HuskerRoom. In most homes this room is simply referred to as the living room. You can see Husker stuff on the wall making this room a shrine to the team and to me. 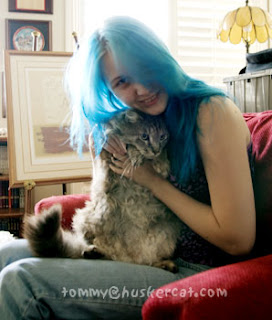 Here she is posing with me in front of the camera. My owner (not the cute one) thought this event deserved a photo. Which it did. In fact, I'm a little surprised my webmaster only put two photos of me and Passion here. The photographer took more than that. Sometimes I don't know what's going on in his head. It's hard to get good help. 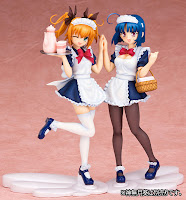 I'm not sure how one gets to be an anime character but I think she might be anime. I heard her and the big guy talking about anime. I think the anime are a tribe or something. I know the big guy has actually taken pictures of the anime. It all seems pretty suspicious to me.

I like to have photos of me with all my sexy new friends. Especially celebrity friends since I'm a celebrity cat. The only thing I can figure out is that she's famous or something. Otherwise, why would you have blue hair? That's just simple logic. It made me wonder if I should get blue fur! But I'm famous enough as it is. Plus, if I were to get a fur makeover it would obviously have to be Red!
Posted by Liam the Huskercat at 10:15 PM No comments: