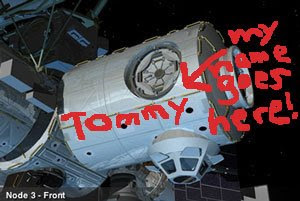 So here's the deal - you've probably heard of the International Space Station. I hope you have. I'm a cat and I've heard about it. Anyway, they're shooting another room up. I suspect it's a place for the Russians to stay since they don't use deodorant and so they kinda stink. But they're having a naming contest and I would want all my fans to submit my name (spelled Tommy) so it would be painted on the side of the room thingy they're shooting up there. You can see the official NASA photo of it. Which looks like it's already on the space station. Hmm ... I hope this NASA group is on the up and up. At any rate, if you got enough time on your hands to read my blog, then you got time to click HERE and vote for my name. It's for the greater good. The name Buddy is in the top 10 and I think we can all see that Buddy is a dog's name. Talk about a retarded name! How embarrassing would it be to have a space room named after a dog??!! I'm not prejudiced or anything but dogs have to be the dumbest, smelliest, most worthless animal that runs on four legs. Plus, they're just stupid. So let's avoid a national embarrassment.

Speaking of dogs and outer space ... if my name gets on the space room, it would energize my latest initiative which is to start sending dogs into outer space. My plan is that we round up a bunch of dogs each time the shuttle flies off and when they get in orbit the cat-lovin' astronauts will open the pod bay doors, throw a frisbee into space and all those dogs will run after it! OMG that would be so funny! Those dogs would never figure it all out. So vote for me so that, together, we can punk a bunch of dogs!
Posted by Liam the Huskercat at 12:44 AM No comments: 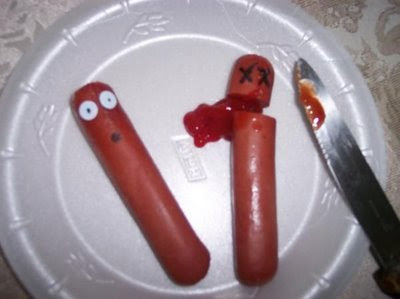 "Are you sure?" the distraught woman asked. "He was a great family pet. Isn't there anything else you can do?" The vet paused for a moment and said, "There is one more thing we can do."He left the room for a moment and came back carrying a large cage with a cat in it. The vet opened the cage door and the cat walked over to the dog. The cat sniffed the dog from head to toe and walked back to the cage.

"Well, that confirms it," the vet announced, "your dog is dead." Satisfied that the vet had done everything he possibly could, the woman sighed, "How much do I owe you?" "That will be $330," the vet replied. "I don't believe it!" screamed the woman. "What did you do that cost $330?"