To bee or knot to bee

Nothing as classy as starting off today's blog with some Shakespeare.


Ok, enough literary stuff. We had a BIG problem here at Chez Liam this morning. Unwanted guests - for the last week. The police sketch artist drew up a picture of the perps from my description. The forensic sketch can be seen below and perfectly illustrates the problem.

There were about a bazillion bees and they had built little homes inside the base of the olive tree. They're called bee hives and one can be seen in the forensic photo below: 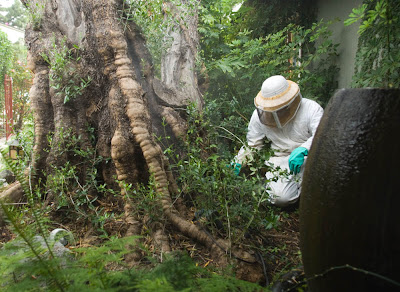 As can bee seen in the above photo, my owners hired an official bee killer who does his job in some kind of hazmat suit. Hired bee assassins like this guy are ruthless. There were thousands of bees in the tree and he used neuro-toxin sprays and chemical death gases to execute the bees, the queen, all the drones and the baby bees.  They had it coming; one of the little bastards stung my owner (not the cute one).
In case the reader (that would be you), is feeling any kind of guilt about our extemporaneous extermination camp, I feel the need to inform you of the disgusting habits of bees.

There I said it. Honey bee sex. It's perverted and my house is in a high-class neighborhood and the last thing we need is a bunch of perverted bees greeting the guests.


Bee sex one of the most sickest, dramatic examples of sexual suicide in the animal world. That's right! I said sexual suicide! Man bees sex up the Queen in mid-air ... right in public! These man-bees are called drones. It's group sex too. All these drones try to sex the queen - it's one big gang rape! Seriously. No need to get offended about this, it's just science. The male bee that nails the queen first shoves his little penis with an urgent contraction of the abdominal muscles and a burst of  hemostatic pressure, that rams the sex-unit right into the queen's who-ha.

Now the story gets weird!! The dude bee ejaculates with such powerful force that it rips the tip of his penis off and is left behind inside the queen's who-know-what. Then the bee spirals into a headlong dive into the ground and dies. This is not how God intended sex to happen. One can only conclude that this kind of behavior is the result of atheistic evolution.

Anyway, this sick evolutionary perversion isn't over. As the naive boy bee dies after having the end of his penis ripped off, the Queen bee's nuptial flight is just one sex/lust filled perversion encounter after another with more than a dozen or so more male bee whores. A bee Queen gives new meaning to the term bee slut!!

Oh. And then guess what??  After the Queen is all "filled up" with bee sperm, she's good to go for the rest of her whore life! I'd go barf right now except I'm not feeling a furball or anything.

So how was your Friday morning???
Posted by Liam the Huskercat at 4:22 PM No comments:

Today was a great day!! They let me out to patrol the back territory. It was clear why. Every morning one hears the insufferable, high-pitched, annoying, and completely unsolicited chirping of birds. There must be hundreds out there pining away for who knows what. To express this algebrarically the number of birds out there is now in the hundreds minus 1. 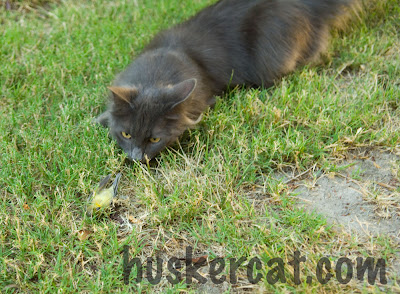 Why you ask ... because I nailed one!! My stealthiness won out over the bird's natural agility. Us cats are at a distinct disadvantage in our efforts to rid the world of birds by the fact that birds can fly. That said, birds don't fly very good when there is a paw full of claws impaling their feather-ridden body (see forensic photograph below). 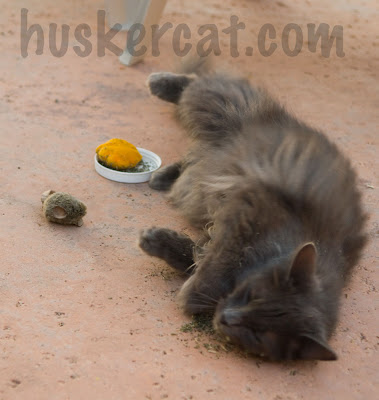 One good turn deserves another they say (although I'm not sure who they are). I was able to exchange the deceased avian carcass for a load of catnip and my mouse toys.  Reflecting on the day reminds me of the poem The Dead Bird by Christy Call.

I stopped listening for what wasn’t heard. The silence became the dead bird.

That's what we had around here this morning - the silence of the dead bird! HA!!  That's pretty funny when you think about it. Oh well, poems about birds are dumb (I'm not the only one who thinks so either).


Posted by Liam the Huskercat at 6:54 PM No comments: