Hey, Kira came all the way down from Oregon to see me. In fact, she decided to move in!! That's what I thought at first. She had a big suitcase and some other stuff. She kept her suitcase closed so I couldn't get into it, but let's not start this post off in a negative light. I'm not that kind of cat! 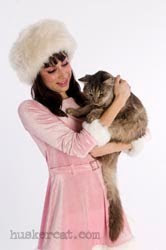 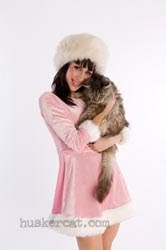 Speaking of disappointments, it turns out that she didn't move in. She was just staying a couple days. I thought this would be a bonanza for me seeing as how she seems much more attentive than the current inhabitants of this hovel.

When she got here she was dressed all normal. But (and I'm not sure exactly how this happened) a little later in the day she turned into some kind of Christmas Princess.

I'm not completely sure about this Christmas Princess thing cause I'm making several inferences in arriving at this conclusion. Not that this is a crime or anything. I would offer as evidence these first two photos that caught her in the act of showing me some love. Which isn't a crime either. Notice her stylish and very fashionable pink dress. It's has ermine trim. Ermines are little white weasels that rich people kill and use for trim on their fancy clothes. It's very expensive fur which is kind of funny when you think it's just a white weasel! But Kira doesn't just have ermine trim. Apparently she authorized the mass murder of a bunch of ermines for her hat. I don't mean to make it sound like there's anything wrong with mass murdering. They're just weasels. I doubt that even deranged PeTA people would give a damn about killing off weasels. Weasels are like one step above rats in the evolutionary tree and all they have to offer society is their little fur coats.

But I'm getting off the topic. If you notice in this third photo of an actual Russian Princess, it shows that Kira's hat is much like the Princess's. Royalty would have hats like this - it said so in google. They would also have dogs (as shown here) probably because royalty inbreed amongst themselves and end up over the generations a little retarded in the brain. With Kira you get beauty + brains!

Kira was expecting to be nice and warm here in southern California. Sadly, it was cloudy, cold and windy instead. She froze her behind off! You can see this in this parking tower surveillance photo that I was able to obtain. People kept telling her that she must have brought the bad weather from Oregon. That's just dumb. People can't "bring the weather" with them! 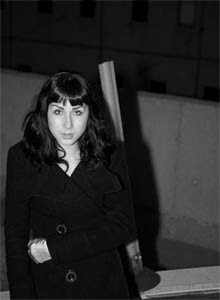 Obviously I don't hang out in parking towers so I wasn't able to help but if you notice Kira warmed right up when she got back and spent some time with me. Sadly she was leaving and this was the last squeeze for me if you know what I mean. That's too bad because I'd rather have her than a bowl of heavy cream! But she is going to visit again in a couple months. Bottom line is that I'm a bit of a chick magnet around here! 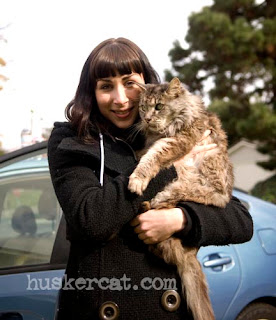 Posted by Liam the Huskercat at 8:03 PM No comments: