Today is May Day. I don't usually celebrate May Day. Big deal you might say! I don't have anything against May (which should be known as International Cat Shedding Month). But I don't celebrate May Day for two reasons. First off, it's International Worker's Day. I'm retired cuz I'm almost 18 human years old. If you do the math it comes out to 88 cat years. Why should I celebrate working? Give me a break! Secondly it's mostly communist countries that celebrate it so it would be un-American to get all woopie about May. I'm no commie!

But this May Day was special because I got another visit from my friend Natalie! She's been here a bunch of times but I haven't seen her for a year! It's about time she showed up for her traditional photo with me. It was good to pal around with her. You can see her giving me some serious squeeze! Nothing wrong with that!
Many of the Huskercat fans might be wondering How does Tommy get all those great pictures with all his sexy friends? It's not too complicated. It helps when you're a real chick magnet like I am. Once you got that going for ya then you just need a studio with all the fancy lights and stuff so my best features will be preserved when I get the squeeze. 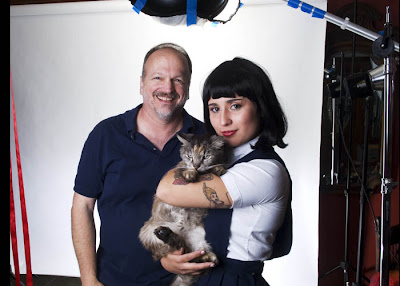 This this picture gives everybody a real behind the scenes sort of view of my Huskercat Studio Facility. According to Wikipedia, I'm the only cat with his own Studio Facility. Ok, actually it doesn't say that on Wikipedia. But it will in about an hour! HA! I'm not sure why one of my owners poked his head into this picture. You'ld think he could get his own friends or at least find something to do!
Anyways, I'm not the only one who can be funny. Later on Natalie texted us a photo she took which was pretty funny. I've included the photo in question. For some reason she sent us a photo of a little poop at the bottom of a toilet! My first reaction was What's up with that?? But then you got to admit that was pretty funny. 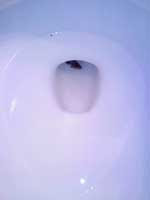 But there was a little more texting ...
My Owner: My brain finally figured out what the pic was!
Natalie: What pic?
My Owner: Of a turd at the bottom of a toilet bowl.
Natalie: What!! That's my fish!!
My Owner: Well your fish looks like a turd!
Natalie: I'm flushing it! :(
My Owner: NO!! NO!!! 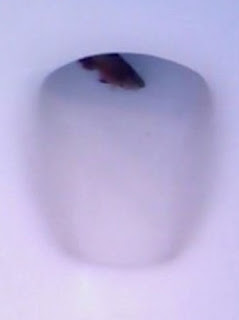 So all that was pretty funny! I don't know if she was just messing with my owner or what. Not that I care if she flushed her damn fish. A smarter move with the fish would have been to have brought it here so I could eat it! I mean - come on! I bet I would still prefer Fancy Feast Grilled Seafood Feast with Gravy though. Nothing beats Fancy Feast!
Well that's a good way to wrap this up. Talking about Fancy Feast!
Posted by Liam the Huskercat at 9:48 PM No comments: