Hey Huskercat Fans!!
So today was the big day for game #2 with Fresno State. We never played them before. I don't know why, but it may have something to do with Fresno not actually being a state. The football rules specifically say that college teams have to be in the US of A and you don't need to be that worldly to know that the USA has 50 states and Fresno isn't one of them!
Going into Games #2 we are undefeated!! That sounds better than saying we've won 1 game.  Well ... 4pm rolled around and the game is starting. Time for me to perch myself in front of the TV. 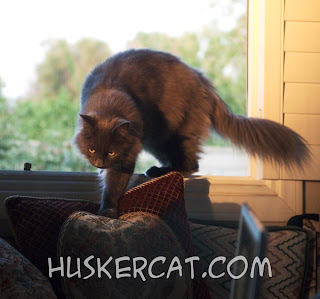 To be honest the first half of this game really blew chunks. Sloppy tackles, fumble, lame passing for us and Fresno State played really good. Maybe you have to play this way if you're in the Big 10. I don't know. The people who run the Big 10 aren't very smart. If you count the number of teams in the Big 10 you'll come up with 12 assuming some basic numeric literacy. Twelve is not the same as 10 the last time I checked. 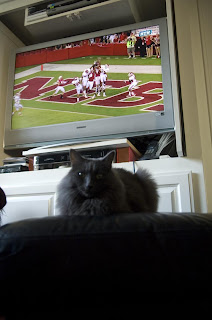 The coach must have said something pretty convincing because the Huskers turned things around in the second half!  42 - 29 is how it turned out with us getting the 42.  I hope the coach tells them his little pep talk at the beginning of the next game rather than waiting around like he did this time! 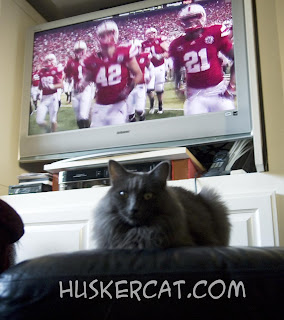 So we won!  Yea for us!! 2 - 0, pretty good. But our guys better figure out the problems before next week.  Home field advantage isn't going to carry the day against Washington (named after the first President of the USA).
Posted by Liam the Huskercat at 9:22 PM No comments: