More sexy new friends for me!

Today was fun! I didn't get one visitor - I got two! My personal cuddler is st merrique. That's her name. It sort of sounds like something you would order at a fancy French restaurant although I would prefer Fancy Feast Grilled Tuna in Gravy. But I digress. Merrique has been venerated by the Pope (this happen to all Saints like Merrique.) I couldn't find Saint Merrique on the Catholic Saint web site so I'm not sure what kind of saint she is, but if it was left up to me she would be the Saint of Hotness!

My other sexy friend is Rachael. She is St Merrique's roommate. She and St Merrique have lots of animals including cats so I think that's why there were able to love me up as much as they did. They have 2 cats, They also have a llama. I think they may be pulling my paw about this llama thing though. It doesn't make a lot of sense to have a llama. Llamas smell really bad and my two new friends smelled really good. 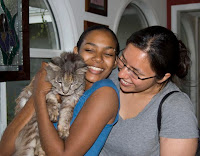 The problem with these two chicks is that they have a big dog. His name is shibby. I have to be honest here, when she first said the dogs name, I though she said his name was shitty. That would make sense to name dogs things like that. Dog are soooo stupid! Shit for brains is how us cats refer to dogs. No matter - I don't have to put up with the dog and I really liked that Merrique and Rachael drove in from LA to see me. How cool is that!!
That's all for now!
Posted by Liam the Huskercat at 6:46 PM No comments: