I got Mise en abymed with Kira!!

Kira is my friend from Portland, Oregon. She came down to see me again. Or so I was told. It's a little hard to believe when she and my owner (not the cute one) packed up a bunch of equipment and headed out to the desert! Joshua Tree Desert and some place called Yucca Valley. I was going to say some god-forsaken place like Yucca Valley, but then I don't really know what God likes. Other than it's obvious he likes cats. You don't get 9 lives and not have God on your side! That's just simple math!
My owner thinks he's pretty smart. It's a claim with precious little evidence, if you ask me! I was hoping for a picture of me with Kira that would show a little imagination. Just a little, tiny bit of creativity. Something with a little mise en abymed would be cool. Ok, I didn't actually know what mise en abymed meant until I tried to explain what I wanted.  I wanted me to be in my picture lots of time. The French have a pretty snazy way of say a little recursion where I get repeated again and again in self-similar ways. You see this kind of stuff in art and things. No reason why that can't be me recursing around in a photo!
Here's what they came up with. It's better than the stuff he usually does. That's me and Kira and then on the TV you can see Kira (and I am not very visible because I'm laying down in front of her). I was hoping for infinite recursion, but this is a start. My owner is usually pretty successful, although that has a lot to do with my low expectations.

So anyways, as you probably know, in literary criticism, "mise en abyme" is a type of frame story, where the core narrative illuminates some aspect of the story. These French words are used in the deconstruction of narrative, by people with lots of time on their hands, and is a paradigm of the intertextual nature of language. That's all fancy talk and a long way of saying that language can't quite describe reality. I say all this as a way of explaining how I can't find the words to describe the reality of how awesome it is to see a Husker fan in a real, authentic, Husker jersey making it look so cool in the middle of the desert standing in front of a giant rock! 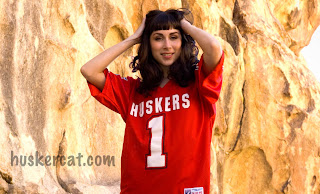 
Posted by Liam the Huskercat at 7:50 PM No comments: