This Saturday was some kind of Huskercat record!  One day --->  3 sexy new friends.

Exactly how does this happen?  It's not exactly clear. All three SNFs are wearing really cute Nebraska Husker shirts.  They are all three holding a "I Love Liam" (that would be me!) signs. All of them look really sad that I'm not there (completely understandable). The only thing I can figure out is that there was some kind of Huskercat conference and NOBODY TOLD ME!!  My owner, who was in attendance (but not wearing a cute shirt) apparently forgot to take me!! That means I didn't get to actually meet my SNFs. :(  I'll post a separate entry for each of my new Huskercat fans! They deserve that. 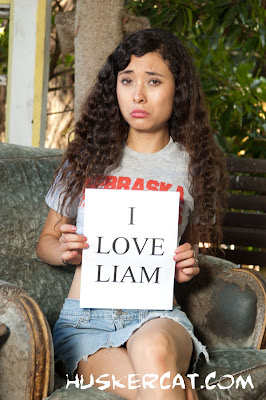 In an attempt to put this debacle behind me, let me introduce Katya. She looks really sad without me. You can see it on her face. I do appreciate her thoughtfulness in making a sign so that there could be actual proof that I was missed. She's clearly not to blame. I'm hanging this on my owner who forgot to take me. What a dimwit!!

There may be an alternative explanation though. This forensic photo (shown below) captures the moment when two gigantic dogs attacked Katya. This seemed to be in retaliation for her showing the Missing Liam sign. Maybe my owner knew they would be crashing the party and didn't take me for my own safety!
Note how these two predatory, vicious, disgusting, smelly dogs attack Katya without a moments notice.  Two dogs - one girl. That's what they call "fair" in Dogland!! They both seem to be off their leashes. Looks like the dogs aren't so retarded that they can't outsmart their owner and escape. It looks like Katya is going to be a victim of these two heinous canines.

But check out this!!! Katya punches the big dog right in the kisser. BAM!! BAM!! Katya is a college student and it looks like she is majoring in ancient Chinese martial arts! Lookz at how she slobber-knocks the jowls off of that fucking dog. It seems obvious that she is practicing Nanquan which focuses on the use of arm and body techniques. Katya is half Chinese and has learned these ancient Chinese forms of defending herself against rabid dogs. 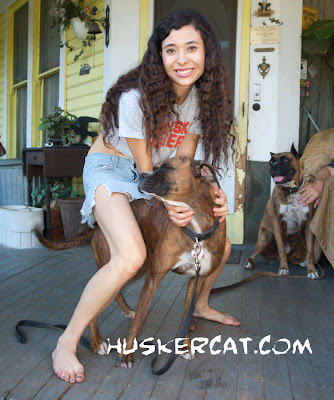 Katya is harnessing all of her qi energy and putting the moves on this beast moments after knocking his teeth loose with her left upper-cut. I'm pretty sure this photo was taken moments before she snapped his neck and killed him. Attacking Katya certainly should get the death penalty. And look at how Katya is smiling. She's thrilled to have another dog kill under her belt. I mean that figuratively unless the blue denim thing she's wearing is a belt. But I have a feeling it's actually a really short skirt. Oh, well ... I digress. Maybe it's a good thing I didn't go to this Huskercat conference. It must have been in a bad neighborhood with those dogs running around like this. On the other hand, I would have had Katya looking after me. I could have clawed the shit out of one and she could beat the other one senseless. We'd make a good team!!
Posted by Liam the Huskercat at 10:01 PM No comments:

Tabitha is part of this Huskercat record of 3 sexy new friends in one day!

Here she is holding a "I Love Liam" (that would be me!) sign. She looks so sad in the first picture because I wasn't able to be there so she could have her picture taken with me. :(  Tabitha is a very special Huskergirl!  Why?  Hey, check out her red hair!  That is dedication!! It gives new meaning to "Go Big Red!!"

I hope Tabitha wasn't too disappointed that she didn't get to be in a picture with me. Maybe she can visit some day and we can make that happen. How come I didn't get to go to this Huskery meeting is a mystery to me. Heads are going to roll when I find out who left me behind on this day!

Posted by Liam the Huskercat at 9:09 PM No comments: