Another visit to the vet. Had to go to CVS which is California Vet Specialists. You know things are serious when all your vets are board certified specialists. If it wasn't for them, I'd be pushing up daisies! And I have no aspirations in that direction. Update: Cancer still in remission (that means I'm kicking it's ass! ... the drugs probably help too). But I have a rather encyclopedic list of other problems that we're working on. I have a feeling I just experienced my last Christmas.

At any rate, there's always special time after a visit to the vet - food and getting loved up. They usually have a little tray of food for me on the big bed. So there are three places in this house they keep food ready for me.

Posted by Liam the Huskercat at 10:32 PM No comments:

SICKO! (that would be me)

I've not been feeling very perky lately. I've been shedding more pounds. I weighed in at 11 pounds last summer. Down to 9 around Christmas and now down to 8 1/2 pounds! I was wasting away and getting kind of surly about it (see surveillance photo of me looking surly). My motivation to patrol the backyard is pretty much gone. This is unfortunate since that is one of my major responsibilities around here. There are days I don't even bother to go outside. 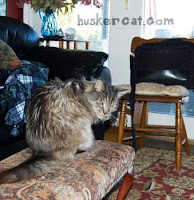 It's been getting serious. I know that because my owner (the big one) weighs my cat food every time they pop open a can of Fancy Feast (I may be sick, but FF is still my favorite! Especially the Grilled Tuna in Gravy). They keep track of how much I eat. They don't weigh the hard food though which makes me feel sneaky every time I eat it. I get put on a scale every day too. I feel like I'm in some kind of research study with all the data they're collecting on me. Maybe I'm a case study and going to be talked about in a veterinary medicine journal! That would be cool. If that happens I expect to be a co-author. None of it would happen without ME! I make science happen! 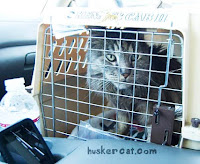 Anyway, to get to the point, I got myself dragged off to California Veterinary Specialists in Murietta. It was road trip time! Not that I was in the mood for a road trip. I had an appointment with Dr Proulx - he's my main doctor. But the first thing that has to happen is a scan of my insides. That makes sense - it's not like I have a fur problem. Technically it's called abdominal ultrasonography. When you call it that, it sounds like it's going to cost alot! 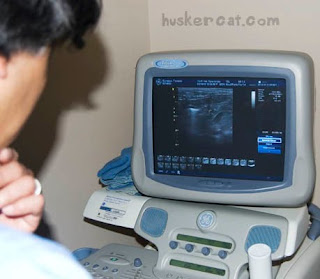 So the guy who scans my insides is Dr Michael Sueda, DVM. He's a Diplomat of some kind from the American College of Veterinary Internal Medicine. I guess - it's something like that. He's got one of those fancy titles like Dr Proulx. My owner is really impressed with fancy titles like that! Me too - the fancier the title, the better the care! I think that's pretty obvious. Dr. Sueda is an internist who grew up in Hawaii which is a country I'd like to visit since there are so many fish there. That's probably where Fancy Feast gets their Tunas. 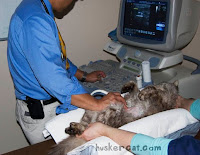 Maggie, the friendliest Vet Tech in these parts, took all these pictures. They knocked me out with something to get all this scanning stuff done so I think I can count on her as a witness. I didn't see that coming. But you can see my insides on the TV. It's not the first time I've been on TV, btw. 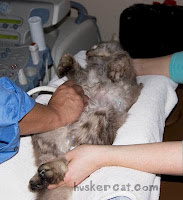 The person holding me down is Katie. Before she worked here she was in law enforcement and crowd control and has a military background. Actually I'm just guessing about that because of how good she was at holding me down. One doesn't get those skills by accident. 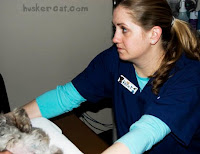 Turns out that I got all kinds of things wrong with me! The side of my neck was getting puffed out. So I'm getting bigger and weighing less. It's one of those cat conundrums that Dr Prouix is always talking about. That's a fancy way of acknowledging that I'm a complicated puss. The diagnosis? I got an abscess. That's a nice way of saying that I got a lump on me that is oozing some disgusting pus. Yuk. (puss and pus are etymologically unrelated, btw. Just sayin')

I can thank that low-life, trailer trash, white cat with tabby patches for the abscess. We got into it and he sunk his claws into the side of my neck. Since I run a family-friendly blog, I won't be specific about where I sunk my claws! HA! At any rate, if he doesn't have the kind of quality medical care that I get I suspect his low-life, trailer trash ass is dead! Not that I'm bitter about this or anything. 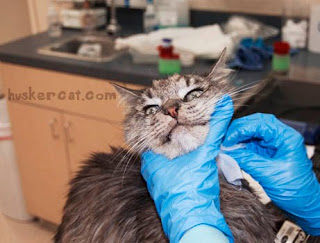 Anyways, they poked a hole in it and let it drain. There I go losing some more weight! Notice that some of these people have blue hands. I suspect they may be from that Avatar documentary about blue people on another planet. That may be a little far-fetched... 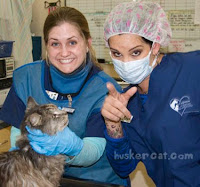 They even got a picture of the duo that did the number on my neck. They seem pretty pleased with themselves! They look pretty excited about having their paws around my neck! 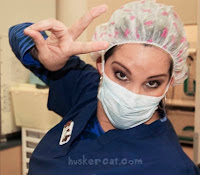 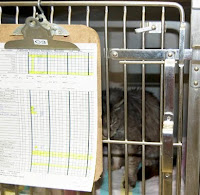 So after all the blood tests, getting my abscess drained, getting my insides scanned, a thyroid test, some special blood test that they only do at Texas A&M and getting drugged up (not that I'm complaining about the drugged up part!), they toss me back into my cell. As anyone can see, there are pages and pages of documentation on my case. I think they're getting ready to publish a medical textbook about me. That would be a fascinating read. 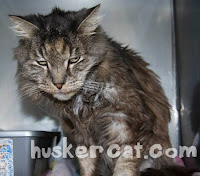 I think these photos (taken in the backroom of the gulag) are pretty hardcore evidence that they were injecting me with something! When I'm actually sleeping I don't look that dopey so it had to be some kind of hardcore drug of some kind! 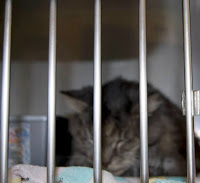 Whatever it was, it turned me into a snooze muffin. Admittedly, a pus oozing, pancreatitic, asthma-laden, bite infected snooze muffin that violates one's stereotype of a snooze muffin. Oh well. Even a usually upbeat feline such as myself can recognize that some days are just going to suck bawls.

Dr Prouix had to summarize things to the owner. Dr Sueda had to give a report to him too. All that probably gave my owner brain overload. 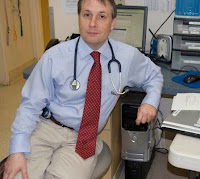 Yeah, today kinda sucked.
Posted by Liam the Huskercat at 10:32 PM No comments: