It was a perfectly normal Saturday morning. I had already been toasting myself on top of the spa - it's always warm. And then on a warm day you get toasted on both sides. Cats are experts at finding warm spots.

Then the day took a turn for the worse! 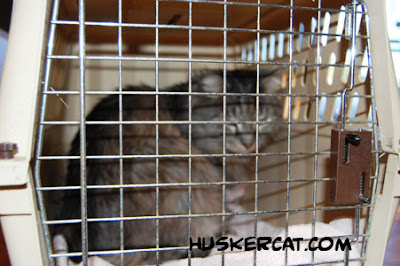 As can be seen in this photo I was tricked into this PPU (that's a portable prison unit). There's only one reason they stick me in this thing - they're dragging me to see the cat doctor. This is all messed up because I hadn't even needed any pills for a week! Well, it turns out the owners had run out and I needed a check up before they'd give me any more. So if you're wondering how many PhD's does it take to remember to refill my prescriptions --- well, it has to be more than two! 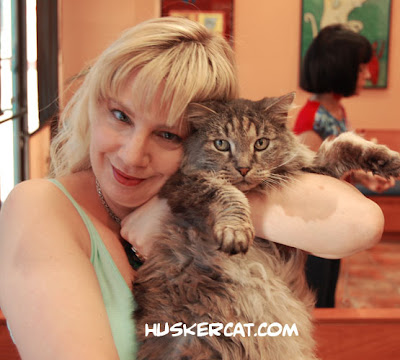 So we get to CVS and they start loving me up like I'm going to forget this is all happening. I mean CVS as in California Veterinary Specialists, not the drug store, in case anyone was wondering. 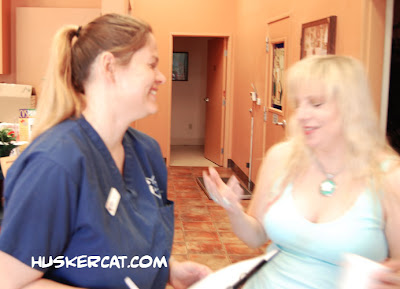 So my owner (the cute one) starts yapping away with the vet tech (aka Maggie). I'm sitting in my cage and they're yapping away. Well that's just great. At least she's asking about how I'm doing and then right there in public they start talking about my barfing a couple of times. Sounds like someone has some resentments! Maybe I should talk about when she's barfed! I could if I wanted to. Maggie keeps asking questions about me. I suppose this is so they can soften me up when they take me to the backroom to do stuff to me! 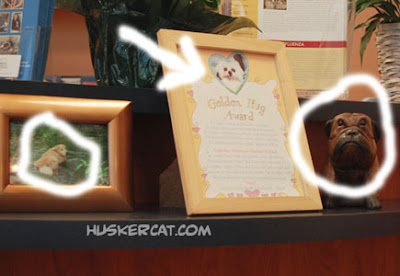 Before we get to that, I'd like to address a rather troubling issue with these Vets. These CVS vets usually seem very professional, but then they go and have all this dog stuff around (see photo above). I've circled and made arrows so my point gets across about this canine trifecta. Dogs are bigger but cats are smarter and more cunnng and their owners are willing to spend more money on us cats than all those doublewide owners and homeless people are willing to spend on dogs. Maybe if Dr Ogilvie reads this and if he has any clout in that place this could change. 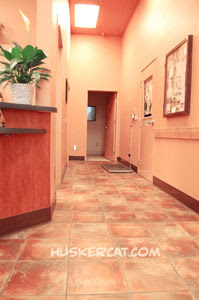 So now we're just waiting. It's a Saturday and it seems like stuff takes longer on weekends. Most of the vets are probably off playing golf or killing puppies - both are pleasurable past-times. It's a long walk down the hall to the examination/surgery/torture dungeons and I have to admit it can be a little disquieting. 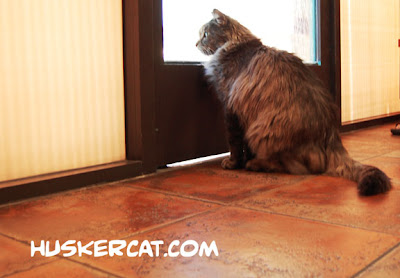 I notice that there is much less a sense of gloom outside. This gets me to thinking ...

That's right - I try and make a break for it! 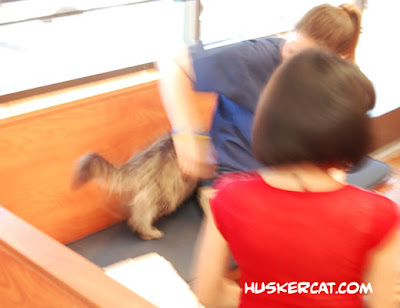 I get past the first bench but then I'm snagged by this other vet tech. I've explained in an earlier post (in great detail) about how sneaky vet techs are. I think this one was spying on me given how easily she thwarted by escape attempt. 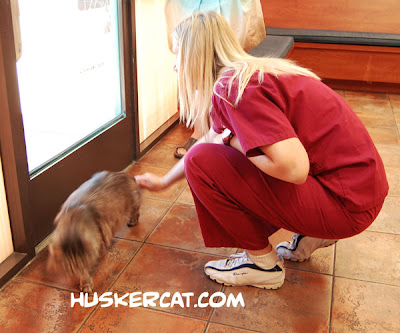 So after this little fracas, Michelle tries to console me. It might have worked had she had the sense to do it somewhere so that I couldn't see the great outdoors. It's hard not to get bitter about all this stuff! So as can be seen by this photo they came out to haul me back to the backroom (as they call it). 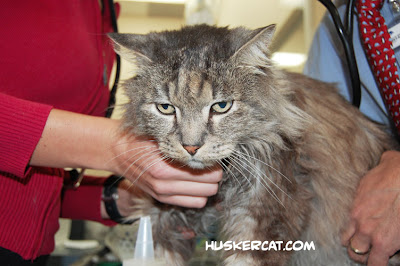 They stick me on a cold table - like the kind they do autopsies on and start feeling up my throat. This vet in the red is from Slovinia which from the sound of her talk it's clear she's not from around here. Slovinia must be out past Moreno Valley - really far away. And Dr Ogilvie isn't my regular doctor. Dr Prouix is my regular doctor. He's a board certified specialist in oncology (cancer in other words). But they tell me that Dr Ogilvie is too. I prefer to see specialists as I'm a complex cat. I see that Dr O has published several books in the field. Well that's good. I want smart people around me to take care of my needs. 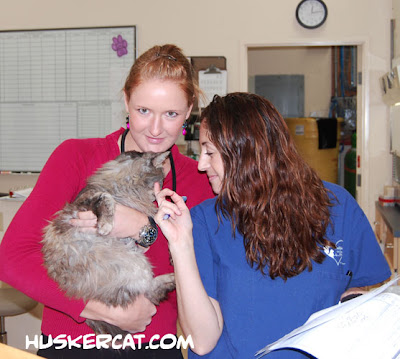 I'd like to point out that even though she is from a far away place, she still was very thoughtful in wearing red for my visit. As the Huskercat (GO BIG RED!), I appreciate the gesture. I've never seen her here before and I've been coming here a long time. They could use someone as considerate as her. I hope she sticks around! And that girl in blue can also stick around as far as I'm concerned. She obviously had a thing for me. I always like to encourage that kind of behavior! 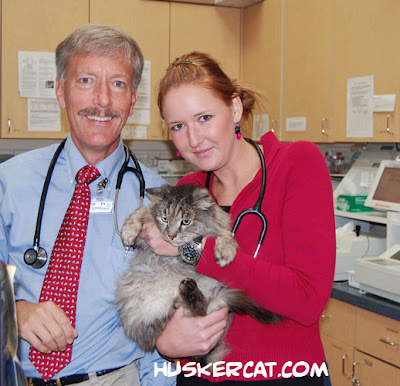 So these photos show me getting probed and measured with their gizmos. I'm surprised that they let Maggie take these pictures of them in the act. Other than probing and poking me, they slapped me down on the table and needled me so they could get some blood. This happens every time I go there! The only thing I can figure out is that they are housing some kind of incompetent vampire who can't get blood on his own. Talk about embarrassing! 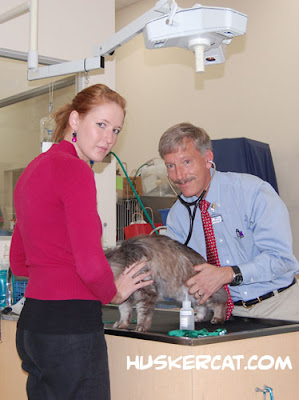 I don't quite get what all they're doing, but you have to admit that in this surveillance photo Dr O and Jenn Spela of Slovinia looks like they got caught doing something. Beats me but I've learned over the years that when Vets look like this you don't want to provoke them. Last thing I need is for them to decide that they're going to use me to juice up their secret vampire. Now that I'm home and can do a little research, I find out that Slovenia is well known for vampires! Holy cow - I was kidding a bit ago about the vampire business but now it seems clear that I'm right about this. Us cats have to go with our sixth sense on stuff like this.

HEALTH REPORT: So it turns out I'm doing great. I was assuming I was doing great since I'm looking so good. I got a refill on my human cancer drug which is actually made for human people. It's pretty powerful so when they looked at my blood cells and my platelet cluster count was good so we know that the drug isn't killing me! That's certainly good! They also gave me some more prednisolone. I have to take that every day. It's a steroid which probably accounts for my being able to kick the ass of any cat that comes in the yard even though I'm getting pretty old. I can also run dogs out of the yard, but you don't need steroids to do that. Dogs are wuses. 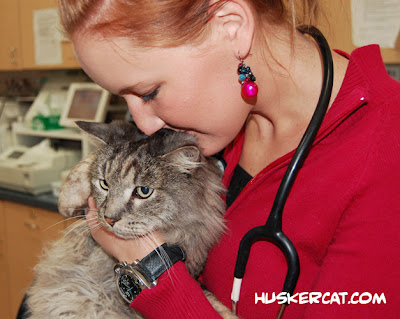 It's getting obvious that this vet in the red sweater is really into PDAs! Her displays of affection are getting pretty personal. I'm not complaining, I'm just saying that she's pretty good at it. She seems pretty smart and smells really nice so I bet she's not one of those vets that works with dogs. She's too pretty to let herself go to the dogs. HA!
Posted by Liam the Huskercat at 10:58 PM No comments: