Hello from Paris, France!!  That's right, Kira took me to Paris which is in a foreign country called France. Our picture was taken by a river.  For those of you who are not as worldly as Kira and me, I provide the following travel info. Paris is known for two things: 1) that tall pointy building and, of course, 2) Pepe le Pew who is in love Penelope Pussycat. The romance of Pepe and Penelope provided Paris with its reputation as the City of Lamour (which means "love" in French language). That river you see is the Seine (which, in French, means "river") and it starts at Dijon (the city where they make that fancy mustard).

You'ld think that the Home of Pepe le Peu would be a major landmark in this town, but we couldn't find it anywhere. The Parliament of Paris has been very negligent in not showcasing his home. It could put Paris on the map!

Posted by Liam the Huskercat at 8:15 AM 2 comments:

Most Cool Friends Ever!!!

We get a lot of people traffic around this place due to my popularity as the Huskercat, but it don't get any better than this!  I have friends who travel from all over the country and from some places that are technically considered other countries - like France and England.  But this is a big deal! Thursday, Kira arrived from Portland, Oregon via LA, to be joined by Merrique who drove in Friday morning from her secret mountain retreat nestled in the San Jacinto mountains not far from my compound. They needed to spend some time with me to recharge their cat deprivation. Kira likes loving me up since she's been away from Mufasa who had to stay in Portland.

Merrique doesn't have a cat so I'm the cat she'd have if she had a cat. Merrique is my newest SNF (sexy new friend). But she's not a new visitor to my place. She was the last visitor of the original Huskercat (Tommy) before he passed on 6 years ago. She remembered that and told me. I had no idea. But she can come visit whenever she wants! I took over the job a month later and everyone says I've done a great job!


This is not to say that she doesn't have pets - she has snails. Or a snail. I didn't get the details. It's (they?) is/are sea snails. I don't want to question her judgment as she is my brand new friend, but having pets that people can eat seems a little questionable to me. However, it's important to be sensitive to cultural differences and she's from Paris, France. This is relevant because snails were invented in France and the people from there call them escargots (instead of just snails). I hear that everyone there eats snails. But to be honest, I'm not sure escargots is a real word. I never heard of it before now.

I have the oddest story about a snail. Some time back my owner answered his door and there's a snail at his doorstep. So the he picks up the snail and tosses it into the garden. Two years later, he hears a knock on his door. He opens the door and it's the same snail. And the snail says, "Hey what was that all about?" Anyway, that was weird. I never saw that coming!  :D

So anyways, Kira and Merrique came to see me. Between the two of them, they've been to Australia, New Zealand, France, Spain, Sweden, the Netherlands, Scotland and England.  Every one of those is a foreign country and now they're hanging out with me! How cool is that!!

Posted by Liam the Huskercat at 10:00 PM 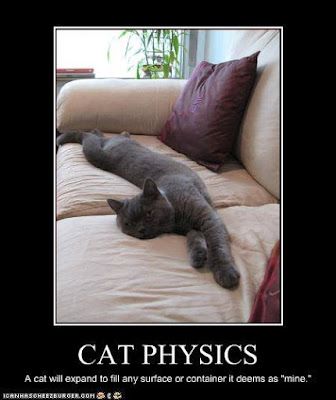