Today was pretty exciting. Kira has been visiting and then today Paul and Tamara came to visit. They are documentary film makers. I live sort of close to Hollywood (so I'm told). They came to shoot some video for a documentary. I was a bit annoyed to say the least that I had NO lead time on these film makers coming to make a documentary about me!! I had them checked out right away and they are from Fluid Films in LA. In fact, Paul is the top dog there!  They've shots lots of important films including stuff for National Geographic who puts out some of the top documentaries on cats (usually tigers and lions, but they're related to me). That's why a little lead time would have been nice. Anyways, a National Geographic/Fluid Films special documentary about me, The Huskercat!

So it turns out they weren't actually here to make a documentary about me. That got me REALLY annoyed!! They were here to shoot some video of Kira getting her picture taken by my owner (the one with the cameras). I get my picture taken a lot so I'm not sure why I wasn't the big feature.

Oh well, sometimes you just have to put things behind you and move on.  Plus, it wasn't their fault that I wasn't informed about what was going on around here. They were both really cool and took an immediate liking to me (that happens a lot actually).

Tamara showed me some serious love while they visited (see photo). She didn't have to run a camera all the time so she was able to take time and keep me from getting too bored. Had I been the central feature of the movie, this party would have been less of a snoozer for me. Fortunately for me, she was able to help me deal with my resentment about not being the feature of the movie they were making.

I made such a good impression on them that I wouldn't be surprised if they decide to make a documentary about me. It should be about Tommy, who was the original Huskercat starting in 2004, and me, of course, who came on board a year ago. They could call it The Huskercat Dynasty! They're welcome to that title if they want it even though I could trademark it.

Here's some action photos of them at work!

Posted by Liam the Huskercat at 11:39 PM No comments:

Kira visited me for a couple of days!  She comes all the way from Oregon (which is a state). It's always exciting with her around. She knows how to properly communicate with a VIP cat such as myself. It's all about the love! 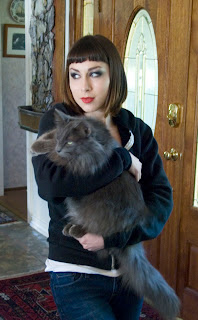 You can see me featured in this photo with Kira. She was being interviewed and videod for an upcoming documentary. They videod her and my owner working together. Naturally I invited myself to the interview. I really didn't have anything to say but felt quite relaxed with the film crew. It was all pretty cool! 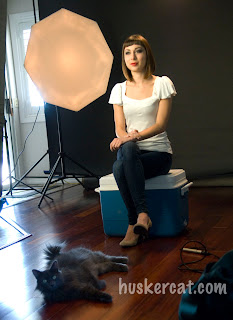 I don't know of any other cats who have been in documentaries. Except for big cats like tigers. They like own the Animal Planet! Along with those miserable homeless rescued cats. I forgot about them, but they don't really count. It's not my fault they have a sad life. Well, there I go ending this thing on a downer! I gotta stop doing that!
Posted by Liam the Huskercat at 7:24 PM No comments: