By two timing me I just mean that this was her second visit. She loved me up both times (see photos). I didn't recognize her at first since she had this biker-chick thing going. I hang with some pretty tough cats so I wasn't intimidated by this. In fact, I love the smell of leather since it's basically a dead animal. I tend to get hungry around leather. It's kind of weird. It's probably some evolutionary thing or something such as that. 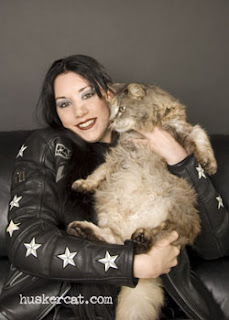 I have to say that Sulia cleans up real good. Lurking below that biker jacket was Sulia in a little black dress. My owner (the cute one) says every girl needs a black dress. I wouldn't know anything about that. I'm beginning to wonder if my owner goes to a lot of funerals! I hope Sulia wasn't stopping by on the way from a funeral. Talk about creepy! That would be weird - especially if it was a cat funeral. Not that cat funerals happen very often. That's a big advantage of having nine lives! It would suck to be a human. They die all the time (I watch CNN). 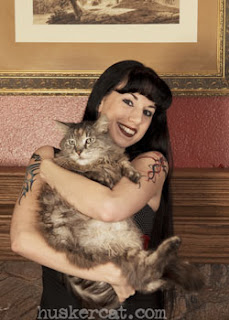 So here I am. All dressed up and nowhere to go. Sulia was all dressed up and nowhere to go too. Since she was all dressed up she should have gone somewhere a little more exciting that this place. Seems like all the responsibilities around here end up on my doorstep. That's just an expression - I don't actually have a door step. I do have a litter box (which shouldn't be discussed in polite company). My owner did make me a little sleeping box thing out of some exotic woods from Africa and South America. It looks really nice and apparently cost a lot. I don't really use it but it was a nice gesture. I prefer to just sleep on his pillow. I wouldn't mind sleeping on Sulia's pillow! That would be heaven! Now I'm all sleepy. That happens quite a bit. I just accept it; I could have worse problems!
Posted by Curt at 9:02 PM No comments: