Dave is a friend of the family. He seems to be really good buddies with my owner (the big one). They talk so much you'ld think they were a couple of gossiping girls! Not that there's anything wrong with gossiping. Gossiping is an excellent source of rumors. Dave's a friendly kind of guy and I like people who will worship me - period. I have no gender issues. 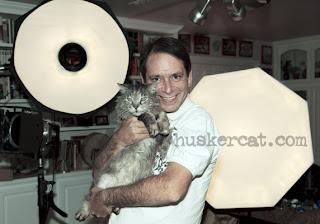 I'm a good example of how you can't prevent love - just look at all the people who can't help themselves when it comes to showing me their love. Not that there's a good reason to help yourself from loving me. Just let the feelings flow.

The thing is - and I'm reluctant to bring it up - is that Dave believes that he qualifies as a SNF, that is, a Sexy New Friend. It's not like I have a bunch of rules about this. I'm not a bureaucat! HA! But seriously, to be a sexy new friend, I've always had three criteria: 1) a person has to be sexy. That only makes sense. 2) You have to be new around here. That makes sense too, otherwise you'ld be an old friend. 3)You have to be friendly to me, in otherwords, a friend. I don't have a high bar for this. Petting me and scratching behind the ears or under my chin are several excellent routes to this status. I'm pretty superficial about it really.

So one could argue, as Dave is, that he should be a SNF. He basically qualifies. His girlfriend said he was sexy (although I think her objectivity is a little suspect). The photos caught him in the act of being friendly. There's no doubt about that. In fact, he's better and pouring on the love than lots of the girls are. But here's the problem! All my other sexy new friends are pretty and wear pretty things. Dave's kind of a slob and doesn't have any fashion sense. 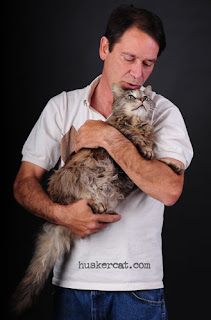 I want to be fair about this because I know whether a person qualifies as being one of my SNFs means a lot to people and really gives a person a status boost. It's called the Huskercat Bump. It's like the Colbert Bump except that I'm a cat. So I think the right thing to do under the circumstances is to have Dave be a SNF but on probationary status. My attorneys say that there's no problem with this from a legal point of view. They also said that someone like Dave should be damn happy with that status too. I think that's right, although when my attorney (who specializes in cat issues) said it, it sounded kind of derogatory somehow. The probationary status phrase was my idea. My attorney first came up with "wannabe" friend but that didn't sound quite right.

So congratulations to Dave - he's my newest sexy new friend! He's one of Tommy's SNFs! Unless he screws it up somehow. He friendly but he's also a little weird. I don't mean that in a negative way.
Posted by Liam the Huskercat at 10:34 AM No comments:

Kelly - Not a sexy NEW friend because she's visited me lots of times! 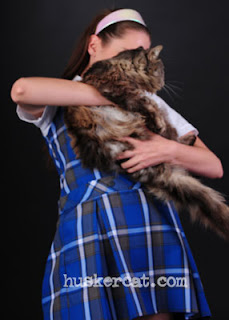 Wow! It was nice to see Kelly again! It had been like 6 months since she visited last. She has to come in from Las Vegas which is a long ways away. Or so I'm told. It's not like anyone has taken me there! I'm obviously worth people traveling long distances. I'm kind of like Baby Jesus since people came from a long way to visit him although I bet he didn't appreciate it much since he was just a baby. I'm not being critical of Baby Jesus - I'm just saying human babies seem sort of stupid. It's like they don't know anything which science has proved, by the way. The last thing I need is a strike against me getting into cat heaven because I pissed off Jesus! It's frankly very questionable that I would get in anyways. I just know that if eating birds and murdering lizards is against the heaven rules, I'm in some serious trouble! But I doubt if birds and lizards have souls so who knows! I might get in after all because if they don't have souls then all my bird and lizard killing sprees would be a public service. Dogs certainly don't have souls - that's pretty obvious and they're retarded too.

But it was about time that she renewed our friendship which involves me getting brushed and petted lots - in case anyone is paying attention. As the first surveillance photo demonstrates I had things to do and places to go but she insisted on some serious public displays of affection (see second photo for proof of this!). I'm not complaining - she's more important than going out and chasing lizards. Especially since it's wasted time since the owners won't let me bring them in. It's really disturbing when humans don't appreciate the pleasure of a fresh kill. Yum! 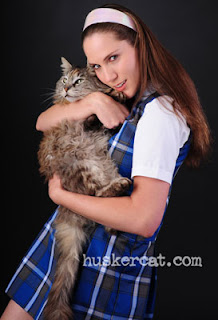 She had just got back from school or something. I'm concluding that from how she was dressed. I actually don't know where she was. She's very pretty and even more importantly smells good. She's certainly smart enough for school since she has figured out that I eat better if I'm being petted. It makes dinner more interesting somehow.

I think this was her third time to come visit. It's hard to keep track with all my visitors and all. I think sleeping 18 hours a day affects my memory sometimes too. I'm not sure about that though - I don't really remember. And who cares really ... as long as the Fancy Feast Grilled Tuna in Gravy keeps finding its way into my bowl.
Posted by Liam the Huskercat at 1:31 AM No comments: 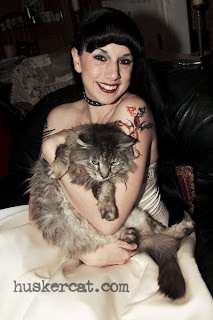 This is Sulia and she's wearing a wedding dress.  And, no, I didn't get married although it looks like I did! I should circulate this photo to get rid of some female cat stalkers.  She said her name was Japanese. It beats me - I've never been to Japanese - it's obviously outside of Riverside.  I thought Sulia was a Sufi name.  The last thing I need is an argument though. And if Sulia is a Sufi name, I'd like to point out that the Sufi's are in the inner, mystical dimension of Islam and the last thing I need is to have some mystical Islamists mad at me! I got enough troubles as it is!
Sulia is tons of fun and even though I was trying to get away from her (it was dinner time for crying out loud!), I really like her.  It's hard to keep up with her, but since I'm a cat it's not expected that I keep up with anyone. It doesn't get any better than being a cat when people take as normal when you sleep 18 hours a day! It's pretty obvious from the big smile I gave her that she's quite fond of me as well. I don't know what it is about me, but people just love me.
She was pretty popular around here too. More than just me. My owner really liked her. The pretty one, not the one who took the picture. And when the pretty one likes someone, I notice they get invited back.  I bet she'll be back soon. She always has an invitation from me - that's for sure!
Posted by Liam the Huskercat at 10:03 PM 1 comment: