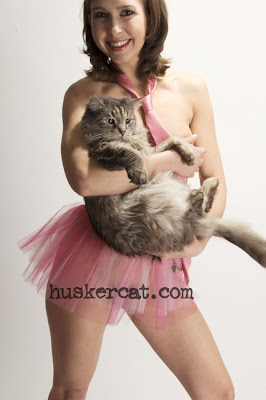 It's been awhile since I've introduced another sexy new friend in my Tommy's Sexy New Friends series. It was hard to imagine that there would be anything good about a drought. Actually, I wouldn't spend time imagining a drought anyway since it's not in my job description, which to summarize, involves eating, sleeping, and getting petted (although not in any particular order). But, oh boy, did that drought end with Melissa stopping by!

I thought something was up when they had me locked out in the back yard when she arrived. I kept trying to get someone's attention at each back door and was getting ignored or forgetten about. Neither of which are forgivable, btw. She was there for quite awhile before someone noticed me and let me in. To which Melissa said Hey, I was wondering where Tommy was! That felt good. It's nice to know at least someone was interested in my company! I will be filing neglect charges against the owners next week. I hope they're paying attention! I hope they read this because I'm willing to negotiate on this, however, I will drive a hard bargain that will involve a lot of cans of Fancy Feast's Grilled Tuna Feast with Gravy and being fed more often than the gulag style 2-meals-a-day thing that passes for cat care around here. And it has to be the one with gravy. In case anyone involved is listening. If you get my drift.

It was all about showing me the luv with Melissa around! We could use more of that around here. We could use more of Melissa around here because at least then I wouldn't be forgotten out in the back yard! She's really smart too since you have to be smart to graduate from Cornell. That's an outstanding school because that's where my board certified cardiologist and my board certified oncologist each got their degrees. That makes me a first class cat! When I'm being squezzed my brain doesn't work like normal but I didn't hear anything about vet school. I don't think Melissa is planning on being a vet though because she didn't dress like my vets dress. At all. She would make a good vet though because she has a good bedside manner as can be seen in the photo above. Obviously there was no bed but I'm just sayin' that she had good cat communication and lovin' skills. She can visit anytime as far as I'm concerned. Not that anyone would care about what I think given how I was left out in the back yard all afternoon!!!
Posted by Liam the Huskercat at 9:05 PM No comments: