Merry Christmas 2008! What Santa brought me!

The owners made me sit on this box for my "Christmas picture." Sounds like I get one picture a year taken or something. I get my picture taken all the time. That's why they have a special photographer for me. All celebrities have their own photographer! But they can take my picture if they want - as long as there's loot to be had! I've already noticed that my sock has three candy canes but the others only have one. This bodes well. For me!
Presents are being opened and I smell something special. I can't figure it out. Us cat's have a special smell organ in our mouth and so I can always figure things out better if I smell with my mouth. Bet you didn't know that cats had this. It's just one more reason in a long list of reasons why cats are superior to dogs. I mean dogs can smell better than cats, but that's not going to make up the difference for being retarded in the brain now is it? Dogs are stupid.
It turns out that the one owner (the big one) gave the cute owner a hair skrunchy made out of mink fur! It was in her Christmas stocking. Wow - they killed a mink just to make a hair scrunchy.  Well, that's ok by me. Minks are sneaky little things and all you PeTA fans who are thinking that it's not fair for a mink to get killed to make a hair scrunchy I'd like to remind you that this mink probably had it coming for one reason or another so there's no reason to be losing sleep over this. For god's sake don't be a wuse about something like this! Save your emotional torment for something worthwhile - like how there might be a Fancy Feast Grilled Tuna in Gravy shortage! I have nightmares about that!!
My owners go crazy about cat stuff. They're complete suckers for any cat crap. Somebody has this all figured out because someone gave them some dish towels with cats on them (see surveillance photo above).  Whoever gave them these towels must live in a double wide somewhere because if they had any taste at all they would have gotten some towels with Maine Coons since we are so much more better looking than the mangy cat on the towel.
So what did Santa bring me? That's what you really wanted to know! I got a bunch of cans of Fancy Feast Tuna Feast in Gravy (my all time fav!); and a can of Fancy Feast Tuna Feast (the kind without gravy), and a can of Fancy Feast Ocean Whitefish & Tuna Feast in Gravy. The feeders know I like the Fancy Feasts in gravy the most so I'm not sure what's up with the Tuna Feast without gravy, but I don't want to seem ungrateful, although I wish they'd pay a little closer attention to my needs than this. But I did pretty well for myself and it's time to be reflective about all the feral cats who go hungry although, I don't like to reflect on that for too long because Christmas is all about having stuff (like Fancy Feasts) and not about being down on your luck.
Posted by Liam the Huskercat at 11:11 PM No comments: 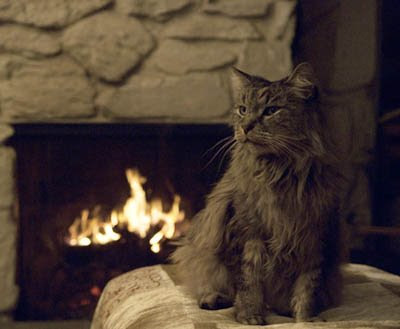 It gets pretty cold here in California in the winter. It was down to like 50 or so today! So they made me a nice fire to supplement the warmth that my lush fur coat can provide me. I don't have much to say. This is pretty much an excuse to show you another really cool picture of me.
Posted by Liam the Huskercat at 8:47 PM No comments:

Save big cats - not dogs I know I got it pretty good when I see this animal shelter stuff. Since I got it so good here (not that I'd let the humans know that) I'd actually rather not be reminded of the sorry state of other animals. It harshes my mellow. But my friend, Carole Baskin, who runs that Big Cat Rescue place emailed me personally. I think she likes hangin' with celebrities which explains why she emailed me.

But I'm recommending that you vote for the Big Cat Rescue place in Florida. Not because Florida is a nice place, because it's not. But you gotta support the big cats. Plus, when you support them you know for sure you're not supporting dogs like at a humane society or something like that. The other thing is that the Big Cat place is in first place. Might as well go with a winner I always say!
Posted by Liam the Huskercat at 12:39 PM No comments: