Asthma, sneezing, and a wart or something

So here I am. Hauled off to the vet again! I had to see my board certified oncologist for some reason and that reason was that I've been coughing and sneezing a bit. Can you imagine what this world would be like if they hauled every human to the vet when they coughed or sneezed!! Yeah? Well neither can I! So, yes, this is me waiting for the medical staff sitting in my the PPU (portable prison unit supplied by the secret police! You'ld think I was on trial for selling the secret recipe for Fancy Feast Grilled Tuna in Gravy!) 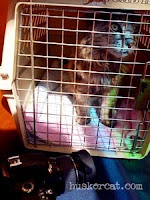 I'm always annoyed when they drag me to these places. But out comes the cheerful medical staff to try and get me in a good mood. I know better though. They just sneaky. No matter how cheerful they are, I'm always hauled into the back room for some pretty rough treatment! 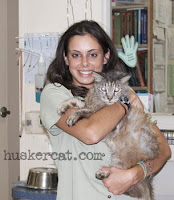 Although I have to say this staff person is pretty easy on the eyes! And I don't need hate mail from the radical feminists either! I call'em as I see them! Anyways, her name is Liz. She's a little new here and lives in Oceanside which from the sound of it is probably by the ocean. She interrogates my owner (in a very pleasant way) about my "problems." He says I'm coughing and sneezing and he thinks I've lost weight and there a little thing on my neck. Jesus! I didn't know I was so messed up until Mr Doom started laying it all out! 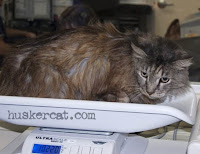 If you're a reader of my blog (and apparently you are!) you probably know that the first thing they do when they drag you into the backroom is see how much you weigh. You'ld think they were going to sell cat by the pound out the back door or something! HA!! Ok, anyways, it appears that I've lost 8/10's of a pound since May which if you do the math (which I don't personally do) it means I've lost almost a pound. That's a bit if you now weight 10.22 pounds like me now. I'm not sure what that last "2" in 10.22 means. I bet it's less than what an upchucked furball weighs! This weight loss is probably bad news ... 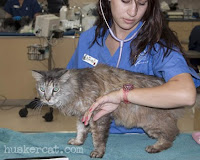 Next, Brooke, another one of the medical types since she has a listening thing around her neck, seems obsessed with time. She's timing my heart I guess. She kept holding me tight - I guess she couldn't get enough of me! 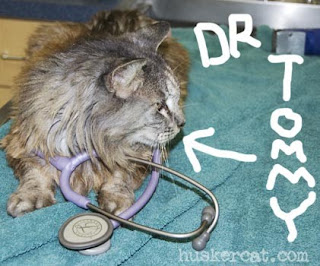 I was hauled in here as a patient, but Brooke promoted me to Doctor! I assumed that's what the ritual of draping the heart listening device around my neck meant. And I assumed wrong. Apparently they were having a little fun at my expense but we were all having fun. And with these guys that just makes you suspicious!

So far nobody has shoved a needle into me so I'm not going to complain just yet! 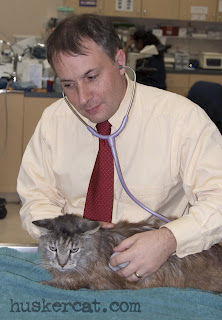 Finally the head guy gets to see me. He's my board certified oncologist. Most cats don't have board certified medical staff. But not all cats are VIP cats either - I'm not to blame for that. I'm not even sure what that certified stuff means but my owner thinks it's a big deal.

Dr Prouix was doing a major check up on me when this wise-cracker started goofing off! Probably the janitor or something! Turns out he's another one of those board certified vets (Dr Trostel), although let's be honest he wasn't acting like it! From the looks of it, Dr Prouix thought he was acting pretty silly. Dr Prouix is a real professional.

So what's up with my medical self - well, it would appear that it was kind of complicated. I know it's complicated because Dr Prouix always draws pictures since my owner doesn't seem to catch on very fast. 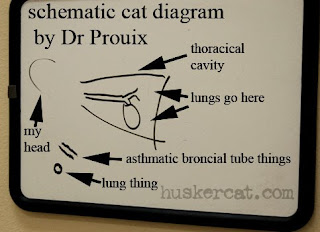 I had my web guy highlight the important things. I'm pretty sure I got it all right. It's not like I have a DR in Vet Science. It's a custom hand drawn picture of me. It doesn't look like me because Dr Prouix isn't exactly an artist and he was drawing my insides. It feels like I have more in me than what he drew, but he's the doctor. He gets paid for knowing this stuff.

So what's the bottom line? What's this cryptic diagram really mean? Well, if I had paid better attention I might have more to say but here's what I remember. The coughing is probably a little asthma. You can see in the diagram that my bronchial tubes get enlarged and that will cause problems with enough air getting into my lungs. That must not be too bad because Dr Prouix didn't give me any drugs for it. He said my steroids would help with it. I like the steroids - nothing like having a little JUICE in my system for chasing and murdering all the new mice that the bird feeder is attracting. The sneezing is no big deal. I'm not sure what the other internal parts of me do. Neither of these are symptoms of any cancer problem which is in remission so it's not a problem anyway. I guess. Dr Prouix said he wasn't worried about my weight loss yet, but that my owners should mix my food up a bit and serve me some even more elegant and expensive treats. Ok, I'm paraphrasing what he said a little, but it wouldn't be the first time a trip here resulted in me getting more of the good food - Fancy Feast Grilled Tuna in Gravy. I think they'll need to get me more of a variety. As long as it's the grilled stuff in gravy, that's good. Maybe they should start getting me those Pounces again! Oh - and that little bump on my neck. Dr Prouix said he thought it was a wart. THAT was a little embarrassing! Warts are disgusting. At least mine is covered by fur so it's not a cosmetic problem like with humans so as long as I'm looking good, it's not big deal! 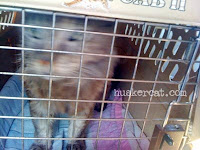 After all this my head was kind of spinning. How the photographer guy actually got a picture of my head spinning is beyond me, but that's how it feels after all this diagnosing stuff. It's not exactly unpleasant. Maybe it's the drugs they got me on. Better living through chemistry, I always say. Actually, my owner is the one who always says that. I think he has problems. 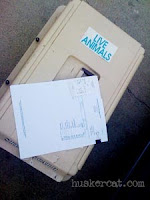 Hey - look! The camera got a picture of the medical bill on top of the PPU. One thing these big medical bills prove is just how important I am! As far as I'm concerned the bigger, the better!! (I bet my vets are with me on that!!) 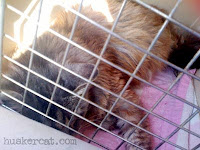 On the way home I was pretty pooed out. It wasn't a bad visit. They didn't "put me under" and they didn't reinforce their vampiric tendencies by removing some of my blood like they usually do. They got somebody new who seems to really like me. And to top if off, Maggie stopped in to say hi and show some love! She's usually my medical technician but for some reason she didn't get assigned to my case today. I hope for her sake they didn't have her doing dog duty. THAT would suck. But she had a few good medical tips for my owner. I think she understands that he needs all the help he can get.

You can see from this surveillance photo from the car what I did on the way home - nap time! And if you're wondering why my owners car has a surveillance camera in it so am I! I'm outta here!
Posted by Liam the Huskercat at 1:25 AM No comments: